The New Dad's Guide to Stuffed Animals: Volume I


We are a little family with a big problem.

It's a simple problem, really.

We have one child.

How out of hand has it gotten? Well, consider this. A few months back, we got this guy...


And he got so completely lost beneath our mountain of plush...

That we totally forgot we had him, and bought another one.

By now, we have just about bought out northern New Hampshire's entire supply of stuffed animals. Our toddler's collection, once just a sweet cozy bin in the corner of the loft, has ballooned into a sideshow we could possibly sell tickets to see. There have been times when I've thought long and hard about adding "Zookeeper" to my professional resumé.

I'm telling you, it can be a jungle out there.

So here now is a loopy little parental PSA for all wayward new dads who aimlessly wander this jungle of overwhelming sites like The Big Zoo & Stuffed Safari in search of the perfect plush. Hopefully I can help you decide which critters to embrace, which to avoid, and what to do when your collection has hijacked your entire home!

The New Dad's Guide to Stuffed Animals: Volume I 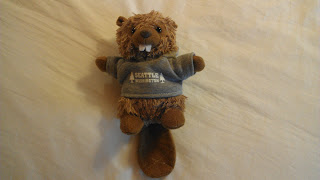 This is Bucky. He came to us prior to our son's birth, just after we brought his twin brother (also named Bucky, I believe), from the Seattle airport to the newborn of a good friend in San Diego. Bucky #1 had been traveling with us throughout our weeklong vacation in SoCal, and because we were five months into our own pregnancy, we started getting attached to him. But sadly, this guy was earmarked for a three-week-old in SD, so dutifully we delivered him to our friends, then tearfully said our goodbyes. So what is he doing here in The Guide? Well, when we landed late one night back home at the Seattle-Tacoma Airport, yours truly got a little bee in his bonnet about getting our own Bucky, so I raced from one Hudson News stand to the next, searching desperately for another Bucky.

And at the very last open newsstand, we found him.

I am sure he's eager to reunite with his twin brother one of these days. 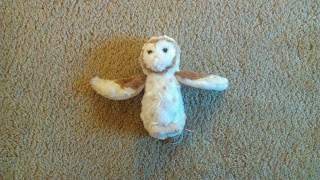 This is Rafter, named after my wife's favorite tennis player ever, Aussie Patrick Rafter.

I sort of hate him.

A few weeks later, in a misguided attempt to level the score, I tried to name our new stuffed hedgehog Hingis, but it didn't really stick. In hindsight, I probably should've named her Steffi... 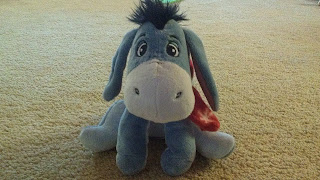 "Thanks for noticing me." -- Eeyore

He's sort of a legend on the toddler circuit. 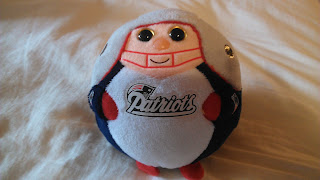 This is Tom Brady. He threw 3 interceptions in the second half of the 2013 AFC Championship game, and made my son cry.

Or was it me who cried?

Either way, this guy is a chump. Stay away from him at all costs. At least until next football season, when hope is once again in bloom. 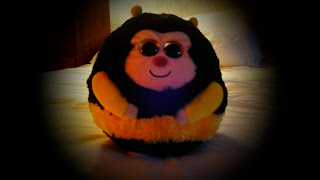 Seriously, can anyone tell me what's so special about The Black-Eyed Peas? 'Cause I sort of don't get it.

Anyway, this is Buzbee. We never really call him anything other than "Bee!" which our son shouts out with great delight whenever he sees Buzbee. I have concerns that our boy's fondness for giving him great big bee-hugs will not translate well to the backyard this summer, and as a silly preemptive measure, I'm trying to teach him the difference between indoor bees and outdoor bees. Fingers crossed on this one. 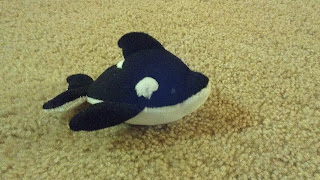 This is Deadhead. Three years ago, I had a big plan to give my wife an Orca for her birthday. See, in the San Juan Islands -- way up in the northwest corner of Washington state -- there is a program wherein someone can "adopt" an actual orca for a nominal fee. The adopter would be sent monthly reports tracking the orcas travels within its pod, an official adoption certificate, and a few other sentimental odds and ends. One of the whales in the archipelago's K-Pod was born in 1994, and named Deadhead to honor the passing of Jerry Garcia. Apparently marine biologists have hippie tendencies -- and what luck, back in 1994, my wife did, too! So I set out to adopt Deadhead at the San Juan Aquarium, only to find that we would be one of dozens who've already adopted her.

"Hey sweetie, how 'bout we save a few bucks and I just buy you this little orca instead?"

She was on board with that.

Here's a wildly cool side note that I just discovered while checking in on the original Deadhead. Since our purchase of Plush Deadhead, Original Deadhead gave birth to her first little one. A fiesty little guy named Ripple, born in July of 2011.

The same month our son was born.

Eventually, maybe after the first few dozen animals have seized your living space, you are going to have trouble thinking of new names. Our son is still in the babbling phase, but I suspect that very soon, he will be vocally skilled enough to not allow us to skate by with names like, "Bear, Bear Two, Teddy, and Teddy Two." So when you find you're stumped, you've gotta dig deep. You've gotta get two parts creative, one part clever, and maybe a dash of crazy. 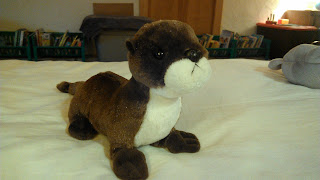 His name is Welcome Back.

Go ahead, tell me you didn't laugh. 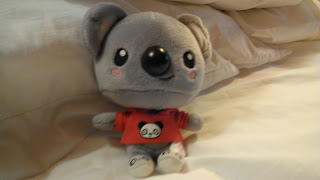 The tag says this little guy is named Tolee, who is evidently a modern-day cartoon koala bear. Ever ones to flip scripts, my wife and I nixed the name, and set out to give him a new one. No easy task. For whatever reason, it was easier naming our son. With this guy, we were stumped. But then  one day, probably after one too many mix-CDs featuring mid-90s jam bands, my wife took one look at the koala's big head and said, "Let's call him Todd!" It was brilliant. No word on whether any monsters will one day join the animal kingdom.
~ 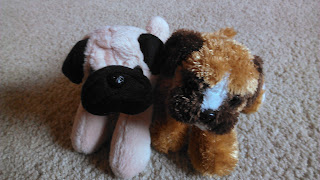 My wife couldn't decide on which boxer to bring home from a recent trip to the supermarket, so she took 'em both in. Unfortunately, this kind of indecision on both of our parts usually leads to no decision, and all nominated animals usually end up in the shopping cart. Anyway, these are our boxers.

We're worried that if they ever split, the one on the left is gonna have a successful solo career, while the one on the right will languish unsuccessfully through ill-advised ventures into acting, painting, and poetry.
~ 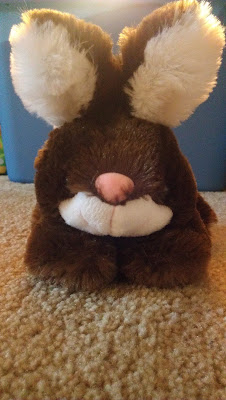 Sometimes, just to break tedium and grab a few cheap grins, I've found it effective to extract a few key players from the zoo, and reenact scenes from favorite shows, movies, books, etc...

I've included a few examples below. 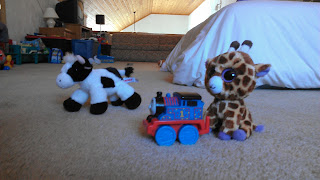 This is a scene from a Thomas and Friends episode called "Thomas' Tall Friend." In the episode, Thomas is told to bring a giraffe to the zoo, but he predictably doesn't follow directions. Thomas stops near a field of cows. The giraffe eats too much and passes out cold. Sir Topham Hatt gets pissed off. But later, in typical Thomas fashion, he saves the day and gets his picture on the front page of the paper. He's kind of a prima-donna. Y'know, for a train. 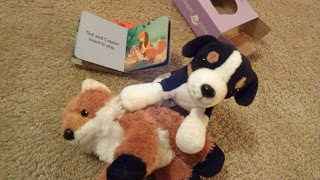 I have never seen Disney's The Fox and the Hound, but based on our miniature board book -- one that makes Cliff's Notes seem like a Tolstoy novel -- it looks like a powerful story about the unbreakable bond between best friends. Sort of like Thelma & Louise, but with four-legged protagonists and minus the nationwide manhunt for murder. 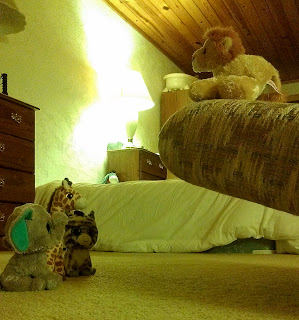 One day, my little lion cub, you will be king... 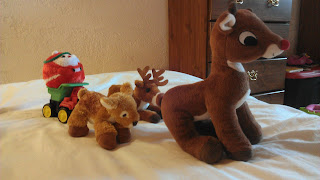 Dashing through the snow,
In a red and green dump truck.
This is getting weird,
Seriously, what the...

Sorry, but when you've gone and bought 173 stuffed animals, you don't exactly have the cash lying around for a one-horse open sleigh, y'know? 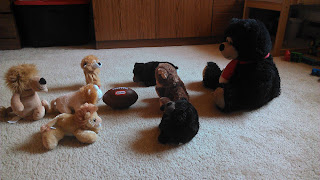 In this pivotal NFC North matchup, the gritty but undersized Detroit Lions take aim at the mighty Chicago Bears and their massive linebacker...

You are not likely to know which ones until it happens, but some of these animals are going to give you moments that will melt your heart.

Here is my story.

Penny arcade legend has it that only a chosen few have what it takes to succeed at what is commonly called, "The Claw Crane Game." Nationwide, children of all ages pump quarter after quarter after quarter into these games, only to leave the arcade angry, penniless, and possibly in tears. To be sure, this is not a venture one goes into with great expectations.

But on a brisk autumn morning in a northern New England Walmart, I found myself with two quarters in my pocket, a restless 15-month-old in my arms, and the ominous Claw Game by the store exit. So I thought, "Sure, let's see if I can win the little dude something!"

This story does not go where you might think it goes.

Nope, I did not conquer the mighty claw on my first and only try.

And oh man, did my proud goofy heart damn near explode!

Here's what happened... I went over to the machine, and before I could even plunk the coins into the machine, my kiddo reached for the joystick. He didn't really have much of a plan -- just kind of wanted to hold it, jiggle it around a bit, and occasionally tap the button on the top of the it. "Hmmm," I thought. "Maybe I should just let him try it."

So in went the coins. The crane creaked to life, and my son started yanking the joystick every which way as the timer ticked down from 20 seconds. 16 seconds. 12 seconds. 8 seconds.

Then he did it. He pushed the button.

Now you have to understand, the crane was near the glass on the right side of the machine when it hooked this green plush ball of some sort. The drop slot was in the front left corner. To me, this meant that the distance the green plush had to travel was pretty much about 2.5 miles before we could call our mission a success. Or at least that's what it felt like. I looked at our son when he latched onto the ball, his wide eyes suggesting that he totally knew what was happening. 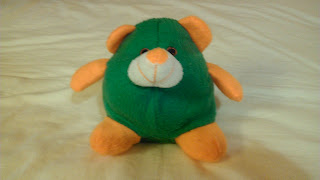 So this is Greenie. It may be hard to tell, but he is actually a bear. Or at least I think he's a bear. Yup, a bear made out of the cheapest possible felt, and rescued straight outta the hallway of a nearby Walmart.

And he is one of my very favorites.

Not even joking, if his cheap felt ever tears or his thin stitches pop, I will take sewing classes just so I can learn how to fix him.

After all, I am the Zookeeper.

No one here gets dinged up on my watch!

But shoot me an email if you have any leads on either a pelican or a bighorn sheep, 'cause we're totally looking!

We could also use a gopher. Preferably one that dances to Kenny Loggins songs.