Just a real quick post to announce the winner of a Thank You For Flying Air Zoe Ebook...

Huge thanks to everyone who left a comment - really thrilled you visited the blog, and I hope you'll continue to do so!

The following names & corresponding numbers were dropped into the Random.Org blender:

And Random.Org told me that the winner is: 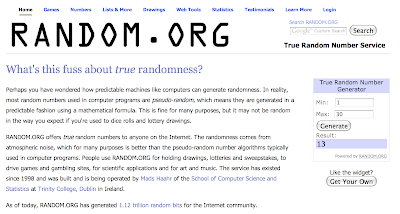 Congratulations to Patricia W.! I will get a hold of you & we can figure out just how to get your Ebook delivered to you soon!

Thanks again for participating in the International Chick Lit Month Blog Hop -- I do hope you all found all sorts of amazing new authors along the way! And if you ever get your hands on a copy of my own novel Thank You For Flying Air Zoe, please feel free to shoot me an email & let me know your thoughts -- I am always eager to hear feedback!

Thanks for flying & keep on keepin' on!

Recently I was asked by my Twitter pal and colleague Tracie Banister, author of BLAME IT ON THE FAME, if I wanted to participate in a Blog Hop celebrating International Chick Lit Month. Jokingly -- at least I think jokingly -- she added something like, "if it's not too girly for you." See, readers who visit every participating blog and collect the Blog Hop's secret words (more on that later) will be entered to win a gift card from Sephora. It's possible that this is a very girly thing. Dunno. Never personally heard of Sephora, and it's probably best I remain blissful & oblivious.

Blissful & oblivious. After all of my recent traveling, this is pretty much my default state, so I shouldn't have a problem with this.

Anyway, I told Tracie that I'd be thrilled to pen a piece for the Blog Hop. I mean what's wrong with "girly," y'know? Some of my best friends are girls. My wife is the world's very best girl. Most readers of my novel THANK YOU FOR FLYING AIR ZOE are girls. Artists from Kool and the Gang to Motley Crue to Cyndi Lauper celebrate girls with hip-swaying, head-banging, hair-flipping panache. So if May is all about celebrating novels written about, for and by spirited women... Oh yeah, count me in!

Not surprisingly, when anyone asks what my novel is about and I tell them, "It's a snap-crackle-pop chick lit kinda story about a grown-up gal's loopy quest to reunite the all-girl band she was in as a teenager," I get a lot of crooked looks. Like I'd said this purely by accident. I swear, there should be a movie a la "White Men Can't Jump" called "Men Don't Write Chick Lit." No, we write taut thrillers, grisly horror tales, and gritty crime novels about down-and-out detectives with questionable ethics.

I guess I never got this memo.

I tend to miss memos. Sometimes on purpose.

It's not a secret in the world of publishing that chick lit is routinely dissed and/or dismissed as a passe genre. The powers-that-be would have the reading public believe that they're tired of Bridget, Carrie and that wacky Shopaholic. Apparently, readers are tired of fun or something, and these days, serious fiction writers shun fun in favor of globally weighty issues.

Issues? Please, I have TONS of issues! And furthermore, my chick lit novel actually does dare to practice planetary betterment, as an entire section or two is devoted to educating the audience about the endangered status of Western Australia's Golden Bandicoot. In fact, let's elevate my global awareness Klout score right now... Here is a pledge -- for every copy of THANK YOU FOR FLYING AIR ZOE purchased or won over the week long duration of the Blog Hop, I will donate ten cents to whatever foundation is responsible for the preservation of the Golden Bandicoot.

I'd donate more, but this author gig is still a few books away from my retirement party, y'know?

But seriously, chick lit fans, I'm sure that having heard ad nauseam that your fave genre is somewhat of an endangered species itself, perhaps you feel a sort of kinship for the Golden Bandicoot?


Anyway, as I was saying, I routinely faced fierce skepticism when trying to get AIR ZOE published. Publishers and agents alike told me that while my story was compelling and that my writing was, like, really quite good, I would have a hard time breaking into the chick lit circle...

Especially as a male author.

Undaunted, I pressed on, knowing that I had a fun story to share. And when finally Booktrope took a chance and published the boy who wrote a girly book, imagine my glow when the chick lit community actually embraced my novel! Seriously, before reviews started coming in, I was sort of ready to be skewered, cooked over hot coals, then raked across said coals once mostly cooked. I was light years from my narrative element, yet somehow I was able to connect with readers through my universal story about one woman's quest to achieve rock and roll stardom 25 years past her musical heyday.

And you know what? You know what other funny little thing happened as the months unfolded and reviews came in?

Men started coming forward to say they enjoyed the novel.

So here now is a direct appeal to all men out there in the audience. Join in on the International Chick Lit Month festivities, and maybe you'll be the winner of the $150 Sephora shopping spree. Again, not sure what this entails, equally as unsure if you can find something for yourself at Sephora, but I'm pretty damn certain you could find something pretty rockin' to impress the special woman in your world.

And let's get real, men... Aren't we all kind of about impressing women? I mean why wouldn't we be -- women totally rock. So this seems elementary to me... If men adore women, and women enjoy chick lit, wouldn't it be in a man's best interest to pick up a chick lit novel every now and then?

And what luck -- there are 34 such novels, written by talented authors from all over the map, right here in this Blog Hop!

Speaking of The Hop... I've been asked to share the rules and regulations of the Blog Hop, so here are the pasted instructions. If you have any questions, please do let me know, and I will be sure to immediately shuttle the question over to someone who knows way more than I do.

Additionally, as you will see below, if you're interested in entering to win a eBook copy of my novel THANK YOU FOR FLYING AIR ZOE, all you have to do is leave a comment on this blog.

Even if you're not interested, wouldn't you want to at least help the plight of the poor golden bandicoot.

Here are the rules for the Blog Hop contest:


We're having a party, and you're invited!  In honor of May being International Chick Lit Month, some author friends and I decided to band together to celebrate, promote, and extol the many virtues of this wonderful, entertaining, and underappreciated genre.  Chick Lit Author Blog Hop 2012 will be a week-long event, running May 14th-20th, and 34 amazing writers are donating their time, talent, and some very special prizes to make this inaugural event a huge success!

We hope you'll join us for this exciting event!  Don't forget to tell all of your Chick Lit-loving friends!  The more, the merrier!

So there you have it! And lastly, below is a list of authors participating -- be sure to check 'em out, good luck with the hop, and Happy International Chick Lit Month!

Even if you're a dude.