Have You Restored Your Town's Former Library Today?

If you've followed this blog over the past several months, you're aware of how much I cherish the childhood I had in my little New Hampshire hometown. One memory that always makes me grin comes from my grammar school days -- when our teacher would rally the troops, line us all up single file, and march us through the center of town, over the stone bridge where Jackson Falls spills (often powerfully) into the Wildcat River, and straight to the old town library for story-time, study-time, goof-around-behind-the-shelves time, etc. The stroll from school-to-library was all of 500 feet, but when your legs are little and you're trudging through two feet of snow in zero degree weather, this epic trek may as well have been the length of the entire Appalachian Trail.

Photos of the library like the one below are what childhood memories are made of. 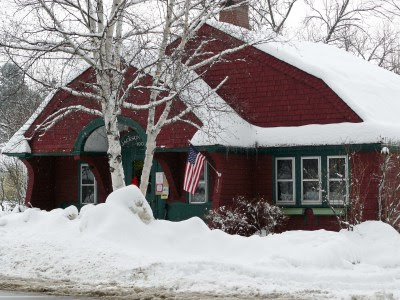 The old library in Jackson, NH was opened in 1901 at a grand cost of $1,900. In its day, it was a nice little architectural achievement which was designed by famed architect William Ralph Emerson.

Anyway, this was our town's library all through the 20th century. In 2010, the town opened up a new library, a much, much larger architectural achievement with a price tag just north of seven figures. This building is a great story in and of itself. Its structure is actually a repurposed barn that was first built in 1858, disassembled in 2008, then reassembled a half-mile down the road where it would become Jackson's new library. At 3,300 square feet, this impressive space could probably fit the old Jackson library inside of it three or four times.

I wonder, when it closes down on account of a newer and even more awesome structure some 100+ years down the road, will there be townsfolk who seek to keep the memory of the newer old library alive?

See, that's what this post is all about. Preserving and restoring a beloved building and its memories.

Upon moving back to my hometown area back in May, a friend of mine who's on the committee for the old library mused that it would be fun to hold some sort of Air Zoe book signing/fundraising event for the facility. The building itself is already part of a district that's included in the National Registry of Historic Places, now the goal at hand is -- much like the old 1858 barn -- to repurpose this building so that it might be used for functions like art exhibits, literary events, and a whole variety of artsy crafty things.

And you should probably stop by if you're able, because with an event title like this, we might exhaust the budget on flyers alone, and there may never be a Second Annual Old Jackson Library Fundraiser Slash...

Never mind. You get the point.

The Fundraiser will start at 5PM and last 'til an undetermined time that is contingent upon how many pizzas, pints, and books are being sold. See, on this night, $1 for every pizza sold by the pub, and $2 for every book sold by yours truly will be donated to the Old Library Foundation so that they can continue their noble preservation and restoration work.

You should come. Even if you're multiple time zones away, you should totally just hop on a plane and do it, because the pizza is that good.

The book is okay, too. (Huge understatement, it's actually wicked awesome.)

In an author bio that's circulating around the internet, I joke that my writing career started in grammar school, where a one page history class assignment ballooned into a forty page fictional account of a politically controversial silversmith in Boston circa 1776. The story is true, and I still have memories nearly thirty years later of doing research for the saga of the scandalous silversmith in the library's history section. Pretty sure I sat on the library's old wooden window seat and read Johnny Tremain cover to cover so I could accurately capture the spirit of the era. So yeah, this library was clearly pivotal to the ultimate rise of Thank You For Flying Air Zoe. And hey, libraries aren't just vital to the cultivation of curious young minds, but they can also be a whole lotta fun, too.

Whether you're a brain, an athlete, a princess, a basket case, a criminal, or none of the above, thanks for reading along, and I hope to see you up at the Shannon Door Pub next Thursday! If you can't make it and would still like to be a part of the fundraiser in some way, please contact me at the email address on the right side of the page, and we'll come up with some sort of clever solution!

And remember, as John Bender wisely said, "Without lamps, there'd be no light."