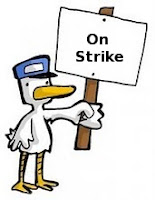 Today is July 19th. It is a date that we've had circled on our calendar ever since the doctor gave the green light to our inaugural Reproduction Project. So last night I went to bed feeling pretty confident that because our due date was July 19th, I would wake up in the morning, and our new little bundle of a rock star would be sleeping there in the very crib we've been using as a storage bin for the last two months.
I was wrong.
This is fine. As long as my belief that our child will be born with the ability to change his own diaper is soon validated, I'm okay with being wrong every once in a while.
You really can't argue with the mighty stork. He's got his own ideas of a due date, and we here are powerless against his scattershot schedule. That said, over these last two weeks, the general emotional climate of our cozy condo has been all over the map. Two weeks ago, we were glowing with excitement, tying up all loose ends and preparing for the little guy to land. Last week, the mood shifted to a healthy anxiety as we wondered each morning if this would be our boy's birthday. And this week...
Well, this week our little pinball machine may have finally gone *TILT*
Evidence of this:
I've recently been hard at work inventing a new, though slightly derivative brand of footwear. The key component of the design being a hand-painted logo on a pair of dirt cheap high-end Flip-Flops. My misguided mission: To create a phenomenon much like the Air Jordan sneaker craze in the 80s and 90s. Only with Flip-Flops.
Not just Flip-Flops, but Air Zoe Flip-Flops.
That's right - Air Zoes.
Admit it - you know you want a pair.
I'm not the only lunatic here, however. See, just yesterday, I caught my wife in a wholly embarrassing position. Yes, while waist deep in accounting spreadsheets, I caught her singing along to a Whitney Houston song... complete with dramatic facial expressions befitting only the most self-assured of divas.
Seriously, as I watched her sing, I could feel how truly passionate she was when she decided long ago never to walk in anyone's shadow.
So yeah. We here in Babyland, we're not quite right at the moment. Truth is, I almost forgot that I'd planned on writing more here before the baby came, but fortunately my wife reminded me.
"Don't forgot to write a Glob Post," she said.
Even worse, I knew exactly what she was talking about.
Probably for the best that we're getting our dim bulb moments out of our system now, huh?  The good news is that I've written out a checklist of things to bring to the hospital when it's Go Time:
1. Baby Clothes & Gear
2. Car Seat
3. Wife
Oh yeah. I've got this totally under control.