What a Long, Strange Trip It's Been... 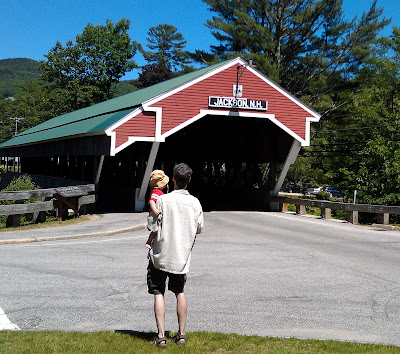 We made it home.

After 13 sleepless days and 3,700 loopy miles across 14 states, the beatnik baby boy and his two grungy parents finally tumbled out of a cluttered van and bee-lined for grub at the fave hometown pub back in early May.

I bet even Jack Kerouac would be proud of us.

When I left this town back in the summer of '93, I did so in a shiny new Toyota Paseo. The Paseo was the bright star of the Toyota marketing department at the time -- their new sporty alternative to the ever-popular MR2. It came with a price tag of about $12K.

120,000 miles later, this car is now parked alongside the van in our driveway, its paint dulled by years of SoCal ocean air and steady Seattle rain. Its Blue Book value is currently sitting at $775, but I'm sure that if the cassette player wasn't broken, its value would easily be $780.

Yup. This is what happens when you make it a personal goal to own the last running Paseo on the planet.

Anyway, to my point... Hands down, the most common question I've been asked over these last few weeks has been, "How does it feel to be home?"

I always reply that it's absolutely amazing to be back here -- this seems to be the best way to simply and truthfully communicate just how I feel about being home. But sometimes I also find myself holding back a more complicated emotion -- that it strangely feels like I just went out for a casual 120,000 mile drive that took 19 years to get from Point A to Point A.

Memories are magnified when you're standing at their source. As we sat in the aforementioned pub on that first night, surrounded by old friends, I recalled with improbable clarity my going away party at that very same pub almost two decades prior. The memory played tricks with my wiped out brain -- did I really spend almost 20 years living up and down the west coast, or did I just fall down some sort of wonky New Hampshire rabbit hole?

This area known as Mount Washington Valley is unquestionably a community that has evolved to accommodate commerce and progress. Yet it has also managed to simultaneously uphold its uniquely colorful small-town charms. And as my first few days passed by, during which I consistently crossed paths with the distant-but-familiar, my connection with the hometown strengthened in accord.

So much of what I'd filed away as a fond memory was once again vividly in front of me.

The same talented local musicians are still playing at the same local restaurants and taverns.

I still know the corners and potholes of The Valley's back road shortcuts well enough to probably drive them blindfolded.

The weather is still a wild card, and the old Valley adage, "If you don't like the weather, wait ten minutes," is still totally true.

Black flies are everywhere. This isn't exactly a fond memory, but it's all part of this excellent hometown package, so I'm surprisingly okay with them.

Bears are also everywhere. Mostly at dumpsters like this one outside the condos at a local ski area: 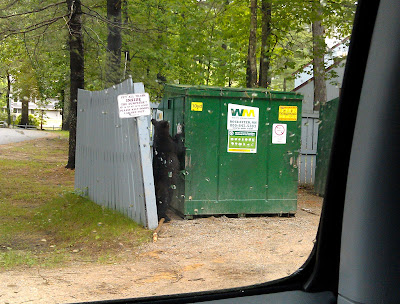 No joke, we took this photo from our van.

I wanted to toss the bear into the back of the minivan and later give it to our son for his upcoming first birthday, but my wife kindly reminded me the difference between teddy bear and dumpster bear, so I let it go.

So what else is still virtually the same about my town?

The little wooden schoolhouse in the center of the village.

The pizza at the now twice mentioned pub is still totally the best on this side of the solar system. My amazing wife gets a lifetime supply of gold stars for once having it shipped 3,000 miles to Seattle, and I'm thrilled we now have about 2,998 fewer miles to travel to pick up a couple of 'em.

The little league field just down the street is also the same, though the pond in left field seems a bit closer to home plate than it once did.

The local swimming hole -- Jackson Falls. Funny, though... Now that I'm a father, I look at the Falls' jagged rocks and racing rapids and I find myself thinking, "Oh wow, is it actually safe to swim here?"

The excellent breakfast joint in the middle of town is still serving pancakes the size of a Frisbee. However, the service there is possibly a bit more questionable than it once was. See, the owner of the restaurant has been a friend of mine since the 7th grade, and she graciously gave me a few shifts waiting tables so that we could pay for this crazy move. I think we're all hoping that hiring me doesn't end up being a massive gaffe on her part. I figure that as long as I don't hospitalize customers and/or burn the place down, I'm probably doing okay.

Oh, and get this! She also, out of almost impossible kindness, offered me a glass-enclosed case in the front entryway where I could set up a small Thank You For Air Zoe display, and possibly end up selling a copy or two.

A very good friend, this boss of mine.

Friendships. This is the number one reason we moved back here. I have known so many of these friends for the bulk of my life, and all of them, at their core, are still the same kids I grew up with. I can only hope that despite all my west coast city years, they see me in the same light, 'cause I know I still feel like the very same optimistic and daydreaming writer boy who's perpetually eager to put his next story down on paper ASAP.

I'm sure many would argue that similitude stifles creativity, but for me, this surreal synthesis between the old and the new has set off some serious creative sparks. I've joked that our son keeps us so busy that I probably won't get around to writing a second novel until he treks off to college in 2029, but I'm not so sure the story I want to write can wait that long.

The Valley is luminous, and its hills are alive with...

Yeah no. You didn't honestly think I'd go there, did you? This town may have awakened a saccharine poetic sap, but I do believe I can keep the schmaltz in check once the initial glow of our return simmers.


If it simmers, that is. See, we somehow achieved the mantra we aspired toward when we pointed the Swagger Wagon eastward last April...

Outside our windows these days, there are no sirens, and a whole lotta crickets.

And what a long, strange trip it's been.

Meanwhile, as the settling in winds down, the career once again looks to ramp up. Tomorrow I kick off another big Air Zoe Blog Tour through TLC Book Tours. The dates for this tour can be found by clicking HERE, and you can also find links to the reviews as they trickle in by going to my Facebook Author Page (the link to this is located in the right margin).

Additionally, as part of what I hope will be Air Zoe's Soaring Summer Of 2012, and in conjunction with the blog tour, I will also be giving away a copy of Thank You For Flying Air Zoe right here on this blog. As has been the case in previous giveaways, just leave your name and email address in the comments section, and when the tour ends in about four weeks, I will draw a winner at random.

And hey, if you wanna share something about your own hometown, I'd love to hear it!

Finally, if you happen to find yourself staring at this very same covered bridge... Drive on through, then stop about a half-mile down the road, and pop into Yesterday's for epic pancakes with 100% pure NH maple syrup -- the kind that would make Mrs. Butterworth & Aunt Jemima close their doors and head for the shuffleboard courts of Boca Raton.

You will no doubt recognize me by my wide-eyed, deer-in-the-headlights look as I smile and say, "Hi, I'm Erik, I'll attempt to be your server today."